Showing posts from July, 2016
Show all

In addition to today being Geddy's birthday, it is also the 42nd anniversary of Neil Peart officially joined Rush - cementing the rock trio that would continue through today.

I'm happy to announce another new section to the Cygnus-X1.Net website - The 'A Show of Fans' Rush Fanzine Archive.

When the 'A Show of Fans' fanzine was first released back in 1991, it immediately stood apart from other fanzines of the time, thanks to its polished and professional format. Each issue was filled with incredible content, including articles, reviews, news, artwork, photographs, letters, advertisements, and more. Yet unlike other fanzines of the time, ASOF was printed, not photocopied, on high-quality glossy paper, typically in multiple colors. So much style with substance.

Given the importance of the fanzine in the overall history of Rush, Cygnus-X1.Net is proud to resurrect ASOF into a new online archive. Each of the seventeen issues will be presented in this archive, starting with the first three issues. 'New' issues will be published each week through the remainder of 2016. 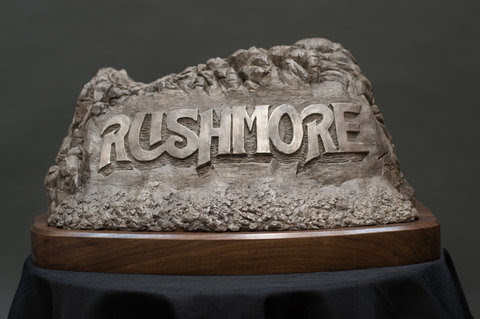 Since their early beginnings, Rush have continually sparked inspiration in their fan base across many artistic fronts. Aside from the obvious musical inspirations that the band has generated in countless others, we've seen drawings, paintings, writings, and more come out of the fan base over the years.

Artist Jorge de la Torre has taken that inspiration to a new level with the creation of his Rushmore sculptor. From his website:Rushmore is the ultimate tribute masterpiece immortalizing Geddy Lee, Alex Lifeson and Neil Peart – three extraordinary heroes of progressive rock who are collectively known as the legendary band Rush.

Originally handcrafted utilizing the intricate lost wax casting process, the bronze sculpture and solid walnut base skillfully set the stage for the Rock and Roll Hall of Famers to be depicted as the new faces of Mt. Rushmore, one of the country’s most recognizable and highly regarded national monuments.

Just as our greatest champions have all been immortal…
July 21, 2016 2 comments
Read more 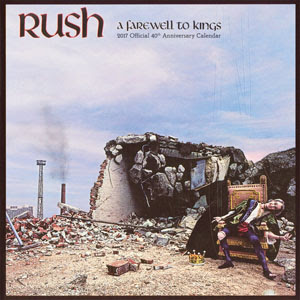 Information regarding the release of the 2017 Rush Wall Calendar has just been made available by Brown Trout Publishers. In celebration of the 40th anniversary of the band's fifth studio album, A Farewell to Kings, this year's calendar will focus on that era.

From the listing:After celebrating their 40th anniversary with a self-titled LP, collector's box set, and their first US tour, Rush left an indelible mark in music history. These Rock and Roll Hall of Fame inductees have maintained a loyal fan base during their rock tenure, and the official Rush calendar is a consistent fan favorite that spans hard rock and progressive rock.Rush wall calendars have been available every year, dating back to 2004, when the first calendar was released in connection with the band's 30th anniversary. Each year since, a new calendar - and sometimes two calendars - have been published.

Pre-ordering for the new calendar is now available via Amazon.Com. According to the Rock Music news site Hennemusic, Alex Lifeson is set to appear on the upcoming Rik Emmett solo album. As many Rush fans know, Emmett was originally part of another Canadian rock trio - Triumph.

In addition to Lifeson's appearance on the yet-unnamed album, bassist Mike Levine and drummer Gil Moore, both from the original Triumph lineup, will also join Emmett. This will mark the first time all three members of Triumph have worked together since working on their 1987 album Surveillance. Dream Theater vocalist James LaBrie is also reportedly working on the project.

Lifeson and Emmett are no strangers to working together. They worked together on "Beyond Borders", which was part of the Canadian Guitar Summit special that appeared in the July 1987 Issue of Guitar Player magazine. They also collaborated on Dream On The Horizon (A Tribute To The Olympic Spirit) in 1988.

For more information about Emmett's album, which is due out later this year, please c…
July 14, 2016 1 comment
Read more
More posts

PROG Magazine recently conducted an extensive poll to determine the top Progressive Rock musicians of all time. In the overall list of 200 selected musicians, all three members of Rush cracked the Top 10 spots.

Alex Lifeson came in at the #9 spot, Geddy Lee ended up at #4, and Neil Peart took the top honors as the #1 Greatest Prog Musician of all time. No argument here.

From the PROG article:Late Rush drummer Neil Peart has been named the greatest prog musician of all time by readers of Prog magazine.

The magazine had a shortlist of just under 250 figures from the prog world, from which fans were encouraged to vote in an online poll – and it was Peart who came out on top.

"Obviously it's very fitting that Neil Peart's been voted the Greatest Prog Musician ever by the readers of Prog Magazine, given that he sadly passed away this year," says Prog magazine Editor Jerry Ewing. "But he's long been seen as a master of his profession for five decades n…
Read more

Alex Lifeson, one of the founding members of Rush and the band's seminal guitarist, is celebrating his 67th birthday today. It was on this date back in 1953 that Rush Guitarist Alex Lifeson (born Aleksandar Zivojinovich) came into the world in Fernie, British Columbia. As Rush fans know, Lifeson co-founded the band in the summer of 1968 along with John Rutsey, the band's original drummer. Alex was also responsible for bringing front-man Geddy Lee into the mix.

While Alex is obviously best known for being the guitarist for Rush, he's also the part owner of the Toronto restaurant The Orbit Room, which unfortunately closed its door earlier this year, is a licensed aircraft pilot, motorcycle rider, a gourmet cook, and an artist.

Alex has also been known to dabble with a little acting now and again. Back in 2018, he appeared a couple of times on the CBC comedy-drama Crawford, which premiered on the CBC in Canada last summer. A preview clip of Alex's recent performance on…
Read more

Celebrating the Life of Neil Peart on his 68th Birthday

Just over eight short months go, right at the onset of 2020 - the year that will live in infamy - the world lost a genuine legend when Neil Peart succumbed to brain cancer on January 7th. While the sting of his sudden loss continues to weigh on Rush fans the world over, the breadth of his contributions to the world of music coupled with the inspiration he fueled for countless musicians will always be applauded. Today we mark Neil's 68th birthday with a brief look back at his decades-spanning career, while also highlighting recent tributes that were made to honor his memory.

Neil Ellwood Peart was born in Hamilton, Ontario, and grew up in Port Dalhousie (now part of St. Catharines). During adolescence, he floated between regional bands in pursuit of a career as a full-time drummer. After a discouraging stint in England to concentrate on his music, Neil returned home, where he joined Rush, a Toronto-based band, in mid-1974, six years after its formation. Early in his career, Ne…
Read more

Modern Drummer magazine will be streaming their annual drummer festival on September 12th, which coincides with Neil Peart's birthday. Part of the festival will be a tribute to the late Rush drummer and will feature a number of guest performers. From the announcement:“Modern Drummer turns 45 next year and through more than 40 of them, we formed a close and unique collaboration with the one and only, Neil Peart. Neil even gave away his iconic candy apple red kit to a Modern Drummer reader in the 80’s via mail-in letters chosen personally by Peart himself! It was without question that as Modern Drummer celebrates our twentieth festival, we are honoring Neil with a fitting tribute from some of his closest friends as well as world-class drummers that he inspired. The Modern Drummer Festival is a celebration of drums, drumming and drummers worldwide. This year will be the first year that everyone can attend as our capacity just went into the Hemispheres!” said David Frangioni, CEO an…
Read more

New Rush: The Day I Was There Book Features Rush Fan Stories and Memories

Author Richard Houghton will be releasing his new book titled Rush: The Day I Was There on November 13th. Similar to other books Houghton has authored, including versions on Led Zeppelin, Pink Floyd, and Jimi Hendrix, his Rush book focuses on stories and memories from Rush fans across the globe.

More on the book:British music author Richard Houghton has compiled a fan history of Rush. Rush - The Day I Was There brings together the memories of over 400 Rush fans from around the world to tell their story from the perspective of the concert-goer. From some of their earliest shows through to the last show on the R40 tour, the book tells the band's story from the front row of the audience.

Richard, who remembers hurrying down to his local record store to buy Exit... Stage Left on the day it was released, said, 'I only saw Rush once myself, at the New Bingley Hall in Stafford in the UK, and couldn't possibly hope to compete with some of the guys I've spoken to for this boo…
Read more