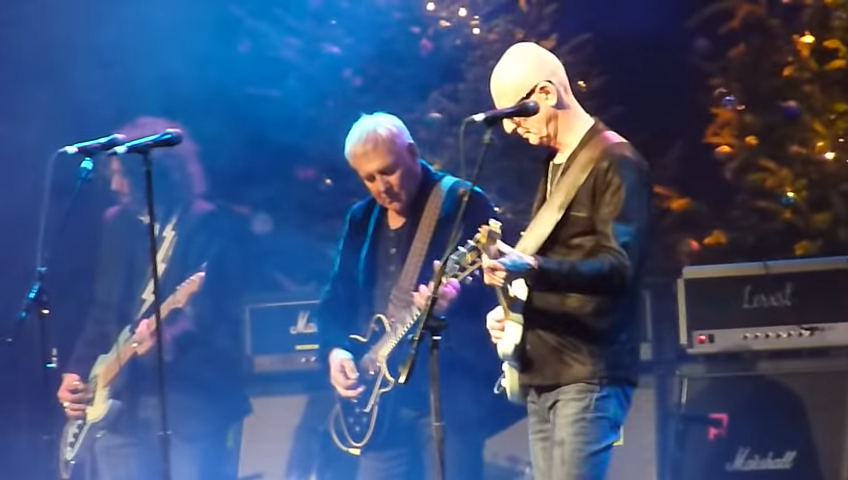 Last night, the 14th Annual Andy Kim Christmas Concert, which supports the CAMH Gifts Of Light Foundation, took place at the Queen Elizabeth Theatre on the Exhibition Grounds in Toronto. Alex Lifeson was one of many celebrities on hand for the benefit concert; his first such appearance since 2010.

During the concert, Alex performed with Andy Kim on two of his hit songs: Rock Me Gently and Sugar Sugar. Later in the evening, Alex and also played two songs with Max Webster's Kim Mitchell; Lager & Ale as well as Battle Scar, a song Rush and Max Webster collaborated on back in 1980. You can view a video of that performance below or directly at this LINK.

The event was hosted by comedian Russell Peters. Among the other artists that were on hand for the concert were Broken Social Scene, Billy Talent, Ron Sexsmith, Tom Cochrane, Hayden, Mary Margaret O'Hara, Bif Naked, Theo Tams and Peter and Leah of July Talk.

The event will move to Montreal on December 15th at the Corona Theatre. Special guests will include Coeur de pirate, Ron Sexsmith, Brad Barr of the Barr Brothers, La Force and Jake Clemons.Thanks to RushFanForever and Ed from RushIsABand for sharing the news.
December 06, 2018