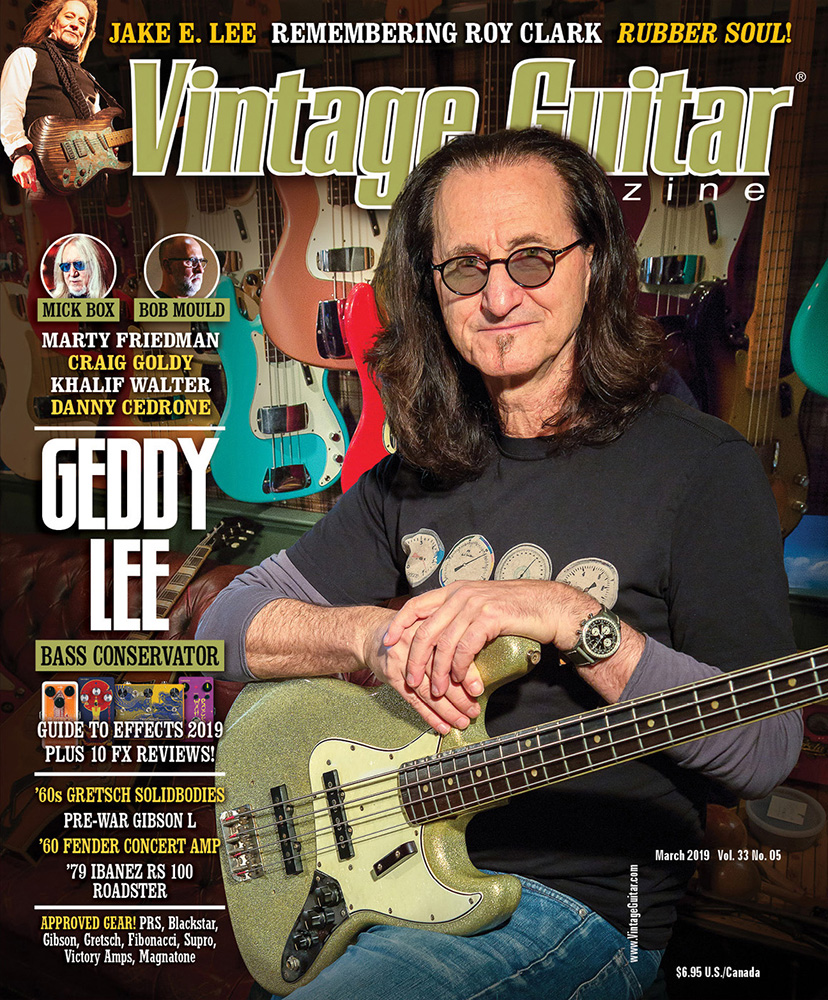 The March 2019 issue of Vintage Guitar Magazine features Geddy Lee (and his collection of bass guitars) on the cover. This issue includes a lengthy interview with the bass-collecting front man of Rush, as well as numerous photos and details on many of the bass guitars that Geddy has collected over the years.

Titled Geddy Lee: Bass Conservator and conducted by Vintage Guitar's lead editor Ward Meeker, the interview covers Geddy's earliest experiences with playing and performing the bass, talks in length about many of the unique guitars in his collection, and covers the writing and research process for Geddy's Big Beautiful Book of Bass.

What was your first good bass?
That was a '68 Precision. I worked a lot of Saturdays in my family's variety store and saved my money to buy a sunburst Precision. Through high school and bar gigs, that was my workhorse. In the book is a picture of me playing it; the finish was pretty worn by the mid '70s, but I played it until I got my first record deal and eventually turned it into my Space Bass.

Was the Rick 4001 next?
Yes. When we got an advance from Mercury Records, the first thing Alex and I did was go to Long and McQuade, here in Toronto. By that time, I was a huge Chris Squire fan, so I had to have a Rickenbacker 4001. They had a bunch on the wall, and I picked the black one and a Sunn 2000S amp with two twin 15" cabinets. I was a rock star then (laughs)! My big splurge. I had a Ricky and Sunn, just like the big boys.

Did the sound and feel of the Rick change the way you played?
Well, I spent a lot of time trying to make it sound like Chris Squire. Strangely, it didn't (laughs). I didn't yet realize that a player's sound comes from their fingers, not from the instrument or amplifier. I'd crank up the top-end and get it twangy, and woodshed as often as I could, trying to play Yes songs that were beyond me at the time. I'd get moments, but not the whole thing. I was also a big fan of Jack Bruce at that time, along with John Entwistle and Jack Casady. Those were the guys I was mimicking as I was becoming more professional.

You can read the entire article directly at this LINK.

To order a copy of this issue, please visit the Vintage Guitar Magazine website.
February 06, 2019