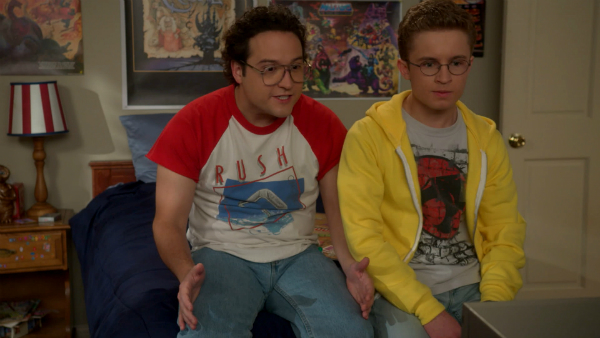 Over its six seasons, the ABC hit comedy The Goldbergs has had numerous Rush references thanks to the character Johnny Atkins fascination with the band. Atkins, who is portrayed by actor Sean Marquette, almost always wears a Rush t-shirt when he appears in an episode. In fact back in Season 3, an entire episode aptly titled "Rush" centered around the formation of a female Rush cover band who perform Tom Sawyer in a Battle-of-the-Bands competition (Click for Video)

According to the show's publicist Ike Richman, this week's episode (Season 6, Episode 16 - There Can Be Only One Highlander Club) will feature Johnny Atkins donning eleven different Rush t-shirts in all. From Richman:

Actor Sean Marquette, who portrays Johnny Atkins, on the ABC-TV hit comedy The Goldbergs, steps into the Limelight in an upcoming episode of The Goldbergs, and will wear 11 different Rush concert T-shirts throughout the episode which airs on ABC-TV on Wednesday, February 20 at 8 p.m.

The Goldbergs’ executive producer Adam F. Goldberg often creates “totally surreal” moments in his show featuring life-long friends, heroes, idols, and other well-known celebrities from his personal life of growing up in a suburban Philadelphia neighborhood in the 1980s into his show.

“Johnny Atkins is this sort of modern-day warrior with that mean, mean stride,” said Goldberg. “His character is designed to be this rebel and a runner, a restless young romantic. He is based on a friend of mine from high school that was always wearing concert T-shirts whether it was in the high school halls or the shopping malls.”

“I’m a huge Rush fan, and this is my way of always paying tribute to one of my favorite bands by having Johnny wear a Rush T-shirt in every episode,” said Goldberg.

Marquette’s character wears a Rush T-shirt in every episode he appears. He will also make a cameo appearance immediately following The Goldbergs episode on February 20 on the show’s successful spinoff, Schooled, airing at 8:30 p.m. on ABC-TV, in a Rush T-shirt, of course.

Many thanks to the show's publicist Ike Richman for sharing the news.
February 18, 2019