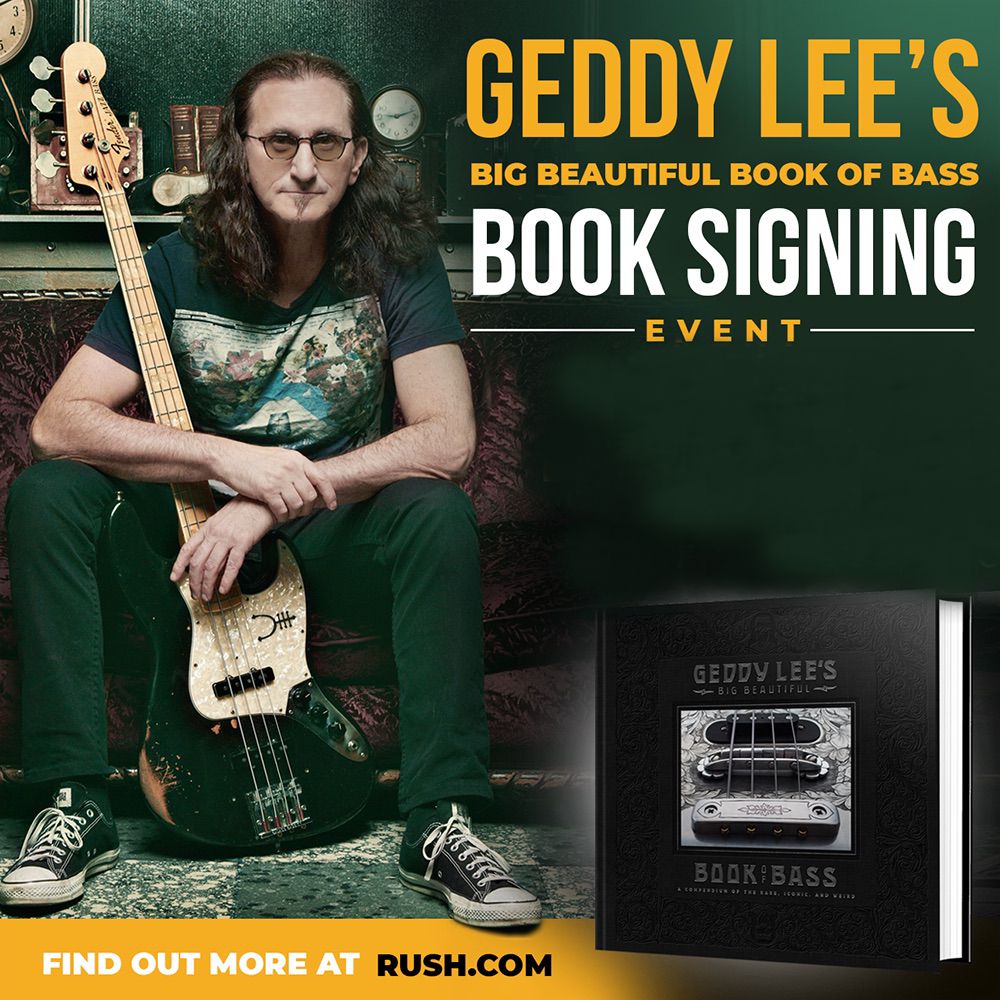 Geddy Lee and Rush.Com have just announced a list of new cities Geddy will be visiting as a continuation of his Big Beautiful Book of Bass Signing Tour.

Event Tickets are available now in select markets at Rush.com/geddylee

One special stop on the tour will be in Calgary where Geddy Lee will open 'Geddy Lee's Big Beautiful Bass' Exhibition at Studio Bell at The National Music Centre (NMC), highlighting a selection of his rare and iconic bass guitars.

Following Geddy Lee's Big Book of Bass Exhibit at the Rock & Roll Hall of Fame in Cleveland, Studio Bell is hosting the first Canadian exhibit of the artist's bass guitars, with 26 instruments curated by Lee himself.

Lee has spent years collecting hundreds of vintage bass guitars-a passion which became the inspiration for Geddy Lee's Big Beautiful Book of Bass. To celebrate the release of his new book, NMC is launching a feature exhibition at Studio Bell that will coincide with Lee's cross-Canada book tour. NMC will host an exclusive event with Geddy Lee that includes a special Q&A followed by a book signing on May 25th with exhibit opening to the public on May 26th, 2019. Stay tuned for details on how to purchase May 25th event tickets.

"The instruments featured at Studio Bell are a combination of rare vintage basses from the Golden Age of guitar production as well as significant ones that I’ve used throughout my career. Basses that I've scoured the world to get my hands on,” said Geddy Lee. “This exhibition gives people a look into the origins and the earliest years of the instrument that help shape popular music ... as well as the ones that I've lovingly held in my hands for over 40 years as I developed a sound that I could call my own. It’s the largest display of basses from my personal collection ever and I’m excited to share this with my fans in Canada."

Visitors will get an up-close look at some of Lee’s guitars from his four decades with Rush, as well as a selection of his historically significant and beautifully crafted collectors’ items. Exhibition highlights include Lee’s iconic Rickenbacker 4001, which appeared on numerous Rush recordings from the 70's and 80's, his signature 1972 Fender Jazz bass, heard on “Tom Sawyer” as well as many of Rush's more recent recordings; a 1952 Fender Precision bass: an early example of the world’s first mass-produced electric bass; a 1961 Höfner “Cavern” bass, identical to Paul McCartney’s signature instrument used during the Beatles’ early days in Liverpool; Rare and eccentric instruments from around the world and so many more.

For more information including a complete list of cities, please visit Rush.com/geddylee.
April 29, 2019