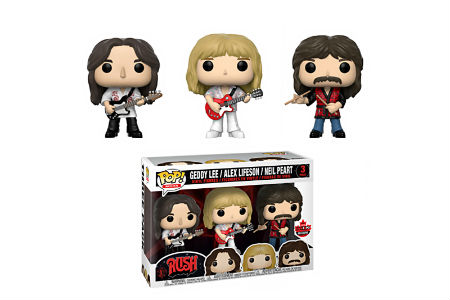 The members of Rush will be the next rock stars to get their own figures in the popular Funko Pop! toy line.

Funko released a list on its website of limited-edition figures that will be made available exclusively at the upcoming FAN EXPO Canada event, which takes place at the Metro Toronto Convention Center from August 30th through September 2nd. Among the new releases on the lists were Funko Pop! likenesses of Geddy Lee, Alex Lifeson and Neil Peart in a three-pack.

The figure of Geddy appears to be wearing a dragon-covered kimono, a la his stage outfit from Rush’s many tours in the ‘70s, while holding a bass guitar. Alex's figure is wearing a printed shirt and holding a guitar fashioned after a Gibson Les Paul. Peart’s counterpart (mustachioed, as the great drummer was through most of the ‘70s) wears a red kimono and holds drumsticks, and appears to be twirling one in his right hand.

While the Funko Pop! website lists no price for the set, reports have indicated that it will retail for $45 and only be available at the Funko booth at the Fan Expo event. There are, apparently, no plans to sell it outside of the event and the production run is expected to be very limited.

Funko Pop! has released a number of rock 'n' roll figures and sets, including, most recently, likenesses of Alice Cooper and Motley Crue.
According to its website, FAN EXPO Canada “is the largest comics, sci-fi, horror, anime and gaming event in Canada and the third largest pop culture event in North America.” The convention is in its 24th year and is expected to attract more than 129,000 people from around the world.

We'll have more information on these figures once it becomes available.
August 02, 2018