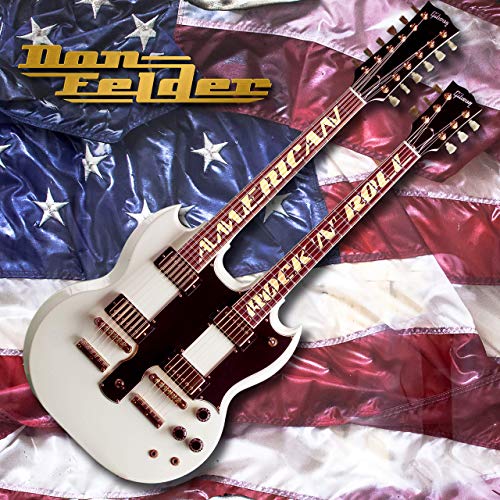 Back in January we reported that Alex Lifeson would be making a guest appearance on Don Felder's New Album American Rock 'n' Roll . The album was released this past April and the former Eagles' guitarist and songwriter has been promoting it ever since.

In an interview that appeared in MusicLifeMagazine.Net, Felder talks about how he came to ask Lifeson to perform on his album, as well as meeting Neil Peart for the first time.

One of the guests to perform on the album brought a bit of Canadiana to what is an album celebrating the best of American rock music, as Felder enlisted Rush axe-master Alex Lifeson to play on the song Charmed.

“I actually met [Rush drummer] Neil Peart before I met Alex. Neil’s little girl and my little boy actually went to the same preschool together, so we became friends and went to dinner and he would come to birthday parties at my house and school events and just hang out. About two and a half years ago he came to a birthday party and I asked him to get up and play. I had my road band with me and Stephen Stills also came and did a set with me; it was just a fun jam at my house. But Neil said, ‘I’ve quit playing.’ I said, ‘what?’ He said, ‘I quit playing. It’s just too hard physically for me to do what I have to do to maintain the level of my performance at my age. I can’t do that, and I can’t go onstage and play at less than what I think is the best I can do.’ I had the ultimate amount of respect for that, but it just broke my heart to hear him telling me that he was done playing music,” said Felder.

“About a year or so later I was playing in this golf event for St. Jude’s Children’s Hospital and Alex was there and we ended up playing together. Afterwards, he jammed with me on some stuff and we played a soundcheck together and I think we played Pride and Joy as a matter of fact, where we traded off guitars. Backstage I took this goofy picture of the two of us playing my white double-neck with each of us playing one of the necks. He’s such a nice guy and I realized as I was making this record that since Alex is not working regularly – he is probably just playing a lot of golf – he probably would be very interested in jumping on this record if I reached out to him.

“And indeed, he was very excited. He was up in Canada and I sent him some stuff for him to play to and he got back to me asking what I wanted him to do. He went in and in a very tasteful way played acoustic guitar on the bridge of Charmed and did some great guitar solos on the end and sent it back and we did a little digital editing where I overdubbed on top of it so it sounds like we’re actually trading off lines at the very end of it. The very last line that he played was very cool, so I figured out the harmony for it and played harmony on top. It was a fun couple of days for him and a fun couple of days for me. I wish we could have been in the same room. And I loved the way he plays, I love his work, he is just a super sweet guy. I haven’t met a Canadian that I don’t like, basically.”

You can read the entire interview at this LINK, while purchasing American Rock 'n' Roll is available via Amazon.
July 01, 2019

Today we celebrate the 70th birthday of Neil Ellwood Peart, the extraordinary drummer and lyricist of Rush who tragically succumbed to brain cancer back in January of 2020. Peart was born in Hamilton, Ontario, and grew up in Port Dalhousie (now part of St. Catharines). During adolescence, he floated between regional bands in pursuit of a career as a full-time drummer. After a discouraging stint in England where he attempted to concentrate on his music, Neil returned home where he joined Rush, a Toronto-based band, in mid-1974; six years after its formation. Early in his career, Neil's performance style was deeply rooted in hard rock. He drew most of his inspiration from drummers such as Keith Moon, Ginger Baker, and John Bonham, players who were at the forefront of the British hard rock scene. As time passed, he began to emulate jazz and big band musicians Gene Krupa and Buddy Rich. In 1994, he became a friend and pupil of jazz instructor Freddie Gruber. It was during this time t
Read more

In a fairly bittersweet moment earlier this evening, Geddy Lee and Alex Lifeson took the stage once again at the Wembley Stadium in London, England to participate in the Taylor Hawkins Tribute Concert. When we first reported Geddy and Alex's participation in this event back in June, it wasn't clear if they would be performing or not. However after last month's surprise performance during the South Park Anniversary Concert at Red Rocks in Denver, Colorado, it became clear that the two surviving members of Rush would, in fact, perform. And perform they did! Geddy and Alex were joined by Foos Fighter frontman David Grohl on drums as they performed the Overture to 2112 as well as a spirited albeit somewhat truncated version of Working Man . Finally, Omar Hakim took over the drums during the performance of YYZ . It's also been confirmed that Geddy and Alex will be performing later this month in Los Angeles when the Taylor Hawkins Tribute Concert takes the
Read more

Update (03/06/2013): The SACD version of Counterparts is now shipping - finally! Thanks Mike Cronis . Update (02/24/2013): The SACD version of Counterparts has been delayed once again. It is now scheduled for release on March 5th. Update (01/17/2013): It now appears that the CD will be released on February 19th according to the pre-order link at Amazon.Com . Back in November, we reported that Rush's album Counterparts was being re-released by Audio Fidelity in the SACD format. The SACD format, or Super Audio CD was first introduced back in 1999 as a successor to the audio CD; claiming to offer a better audio dynamics, more channels (e.g. surround sound), and a longer playing time than a standard CD. While the format never gained much traction, a small market still exists, serving the audiophile community. This mark's Audio Fidelity's first Rush SACD releases since the release of their Roll The Bones Gold CD back in August of 2011. The original announcement indicat
Read more

For the first time in just over seven years, Geddy Lee and Alex Lifeson took to the stage once again to performed an extended rendition of their classic song Closer to the Heart . The surprise performance took place during the South Park 25 Anniversary Concert at the Red Rocks amphitheater in Colorado. More about the concert event: The two-night event on Aug. 9-10 at the historical outdoor Colorado amphitheater — featuring show creators Trey Parker and Matt Stone, along with performances from Primus and Ween — will be taped and aired on Comedy Central and Paramount+. The concert, celebrating the 25th anniversary of the cartoon sitcom, will feature performances of classic songs from the show, including the theme song by Primus, premieres Aug. 13 on Comedy Central and will be available to stream the following day on Paramount+. It is unclear if the concert will have any surprise guests drop by, but as South Park fans know with Parker and Stone, always expect the unexpecte
Read more