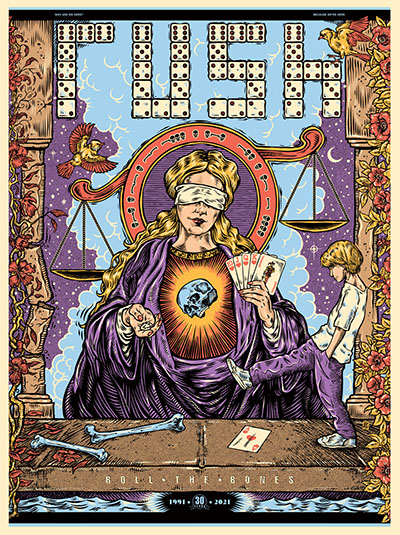 Collectionzz, creators of officially licensed original prints inspired by music, and those who make it, have just announced the release of two limited-edition prints celebrating the 30th anniversary of Rush's platinum-selling album Roll the Bones. Artist Ben Brown, who created the prints, talks about the album and inspiration behind his artwork:

I was fan of the early records of Rush - and being a big music fan, always paid respect to their very capable music chops - both as players and composers. As a kid I loved 70’s hard driving rock (still do!) - Alice Cooper, Deep Purple, The Faces, Led Zeppelin - and those early Rush LP’s fit right in to my play list. I was not as familiar with later output from the band - in the early 90’s I had moved on and was riding skateboards and listening to hard core punk rock and metal.

When Collectionzz approached me to create a Rush poster - I was stoked - and revisited ‘Fly By Night’ and 2112. I also played Roll the Bones. At first I fell back on the old cliche of 'I like the early stuff better'. But the more I listened to it as I worked up the images for the poster, I just couldn’t believe how it grew on me. Testament to their skill to write songs and riffs that drag you in. Pouring over the lyrics for inspiration added another layer too. Neils lyrics and writing in general gave me plenty to draw on. There are quite a few obscure and cryptic visuals we have included in the poster detailed below. It was great fun to work on. I love screen printed rock posters and feel privileged and excited to add this one to my portfolio. - Ben Brown

Available in 'Main Edition' and 'Now It's Dark Edition,' each six-color screenprint is 24" x 18", limited to less than 200 copies, hand numbered, and includes a Holographic sticker on back for authenticity.

For more details and ordering information, please visit the Collectionzz website at this LINK. Comments
September 10, 2021