Exclusive Excerpts and Pictures from Rush: Wandering the Face of the Earth

With the October 29th release date of Rush: Wandering the Face of the Earth: The Official Touring History nearly upon us, Cygnus-X1.Net is proud to bring you exclusive content and images from the upcoming book.

The book includes a foreword by Les Claypool, best known as the bassist and lead vocalist of the band Primus. An excerpt from that foreword is listed below:

“Who wants to go sturgeon fishing tomorrow?” I announced to the room. Ler LaLonde and I had been fixing up an old twenty-four-foot Sea Ray, and being that we had a day off between gigs, we were planning on hitting the bay. It was a little over a decade after that first Rush concert, and my band Primus was in the beginning of a tour supporting those three fellows from Toronto.

It was amazing to be playing nightly with Geddy, Alex, and Neil; even more so, it was surreal that we had, in a relatively short amount of time, become friends with guys who had been superheroes to us in our high school days. “I’ll go,” said Geddy. Had he seen the 1976 Sea Ray prior to showing up at the launch ramp, he may not have been quite as enthusiastic, but there she was the next day in all her glory with El Bastardo splayed across her stern in raised wooden letters. Ler and I had put in fresh indoor-outdoor carpet, enclosed her in green Sunbrella canvas, and repowered her with a new 351 crate motor, so it was much to our surprise when we heard a loud ZZZZPPPHHFFFTTTINGGG come from the engine compartment while motoring at full cruise across the bay. We’d thrown a fan belt, leaving us powerless halfway between the Berkeley Marina and the channel markers of San Quentin. I dropped anchor just off the northwest side of Red Rock, a small island in the south shadow of the Richmond–San Rafael Bridge. How many Rush-ites would crawl over broken glass in their underwear to take Geddy Lee out fishing in the middle of San Pablo Bay? I’ve often thought, Well, Ler and I did it . . . and got stranded to boot.

Geddy was a good sport about the whole thing, actually videotaping me as I radioed the Coast Guard for the help that would never come. We killed the hours by catching a slew of small leopard sharks, but as the sun sank lower on the horizon, Geddy was beginning to get a bit twitchy. Here he was with a couple Rush-geek musicians in their early twenties that he’d just met a few days earlier, stuck in the middle of San Pablo Bay in the winter with no one responding to our radioed pleas for assistance. Eventually a fellow fisherman took pity and towed us, to the opposite shore, just in time for Geddy to hop in a cab and get to the dinner engagement in San Francisco that he had been nervously reminding us of. Ler and I then taxied to the auto parts store to get the belt needed to motor back across the bay, in pitch black, with Ler holding a flashlight and freezing his ass off on the bow. The next day as I’m walking through the hallway backstage of the Oakland Arena, I hear the familiar voice of Alex, goading me with the theme song from Gilligan’s Island. 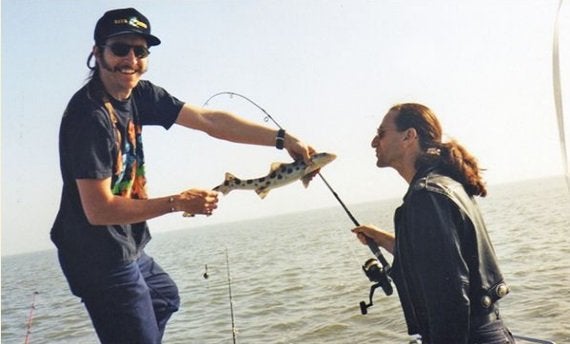 We would go on to do three different tours with Rush, including a rare run through Europe. In the early nineties, a Rush fan was not necessarily the “hippest” thing to be, and in fact, we got quite a bit of flack from the press, especially overseas, for supporting those shows. We didn’t give a shit. Being a Rush fan was never about being “hip.” Besides, we were privy to the behind-the-scenes world of one of the most influential groups of rock musicians of the seventies and eighties. In my high school days, Rush were the musical barometer by which we young, eager fledglings set our standard, so to jam face-to-face with Geddy while Alex played guitar using a tortilla chip as a pick and Neil banged his sticks on the metal doors during one of our many locker-room backstage jams was pretty sweet.

Crouching behind Neil’s throne as he blistered away at his legendary drum solo in an arena full of punters; getting drunk in an outdoor caf. in Berlin and convincing the fellows to start playing “Cygnus X-1” live again; watching Alex put a bowl on Ler’s head and cut his hair—the stories go on and on. Had I been able to look into a crystal ball when I was sixteen years old and see that bit of my future, I would have surely soiled myself. So, when my manager emailed and said I had been asked to write the foreword to the new Rush book, I grew teary eyed with a sense of honor.

We also have two exclusive images to share that came from Geddy Lee's personal archives as well as some fan-supplied photos (Click any photo to enlarge): 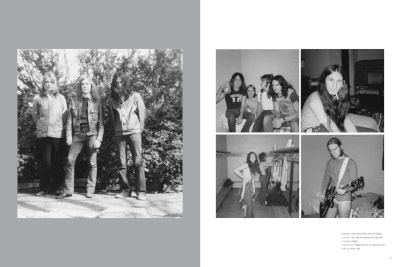 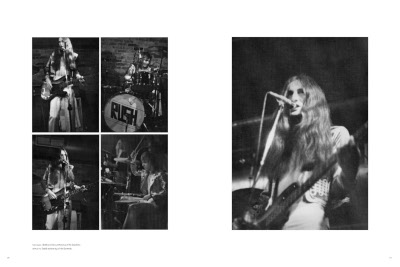 Additional information from the book's publisher Insight Editions is available via this LINK.

Many thanks to James Faccinto of Insight Editions for providing this exclusive content.