Neil Peart will be the cover story in the December 2011 issue of Modern Drummer Magazine. The magazine cover features Neil behind his Time Machine Tour kit and includes the sub-heading Rush's Neil Peart: The Modern Drummer Interview.

The December issue will hit the newsstands on November 1st. You can order/subscribe to Modern Drummer via this LINK.

"...If you’re a Peart devotee, you’ll drool over the detailed shots of the concert performance revealing all of the intricate details of those classic parts. The overhead shots and slow-motion footage are particularly revealing of Neil’s complex choreography..."

You can read the entire interview via this LINK.

Thanks to Ed from RushIsABand for passing along the news.
October 18, 2011 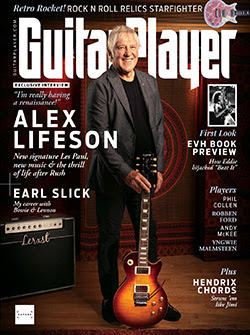 The November 2021 issue of Guitar Player magazine features Alex Lifeson on the cover and includes both an interview with the Rush guitarist, as well as a review of his new Epiphone Alex Lifeson Les Paul Axcess Standard guitar. In the interview, which was conducted by Joe Bosso, Alex talks about life before, during, and after Rush, his new band project Envy of None , the release of his new Les Paul Axcess guitar, and more. From the article: A few years ago, you and Gibson came out with the Custom Alex Lifeson Les Paul Axcess. I can only imagine what a thrill it was to create a guitar to your own specifications. It was. I didn't want to have a guitar just to see my name on it. That's easy, and a lot of people do that just to sell more guitars. I wanted a guitar that I would want to buy for what it was, for its features, so that's what we created. We spent a couple of years working on it, going back and forth on the pickups and the neck. I wanted the piezo pickup i
Read more