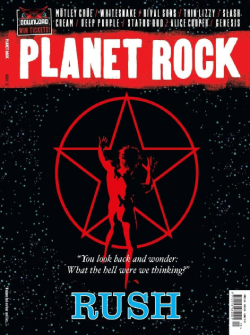 The April 2019 issue of Planet Rock magazine features Rush on the cover, and includes three separate articles including a new exclusive interview with Alex Lifeson. Each of the articles including the interview with Lifeson, look back at the rise of popularity Rush experienced; both when they released their one-two punch of Permanent Waves and Moving Pictures and decades later, with the release of the award-winning documentary Beyond the Lighted Stage. Each piece was written by James McNair, and includes photographs by Fin Costello.

The first article, titled Natural Science focuses its attention on the period immediately following Permanent Waves. From the article:

PRIOR TO STARTING WORK ON their next album, Moving Pictures, Rush enjoyed a musical palette cleanser with Canuck pals, Max Webster. The two bands were close from years of touring together, and Max Webster keyboardist Terry Watkinson had given Geddy Lee some of his first synth lessons. On July 28, 1980, during a huge thunderstorm, the two bands joined forces to record a live-in-the-studio version of Battle Scar for Max Webster's criminally unsung album, Universal Juveniles. Peart recalled the joyous "Wagnerian tumult" that ensued at Phase One Studios in Toronto, and the day's good fortune didn't stop there. Pye Dubois, the Canadian poet who wrote Max Webster's lyrics, was present at the session, and wondered if Rush might be interested in some new words of his. Long-term fans of Dubois' work, Rush were interested, and his lyric, then titled Louis The Lawyer, was ultimately reworked for Tom Sawyer, Moving Pictures' much-celebrated opener.

The interview with Alex Lifeson, titled New World Man also looks back to the early 80's, but also touches upon more recent events:

What's your fondest memory of that final tour?
The closing show in Los Angeles was very powerful. I remember looking around the whole arena and trying to take it all in. The lighting. The crowd. The people around me. It was very emotional for us. I loved the way we presented those shows, starting with [final Rush album] Clockwork Angels and then working our way back to the very beginning. But had we done a typical-length tour of about 80 dates, I think I would have been more satisfied with it.

But you've since come to terms with Rush being over?
Yes, I think so. I don't want to be in a band and tour any more. I don't feel the need to carry on with what I did for almost half a century. I'm fine with it now. And I'm as busy as I would ever want to be.

Busy with invitations to play on other people's records...
Yeah, I do get quite a few. And I take up almost every offer. It's fun! It's mostly manipulating the guitar for new sounds. I can smoke a joint and do that for weeks (laughs).

Finally, with Mystic Rhythms, McNair takes "... a deep dive through Rush's back catalogue..."

Each of the articles, along with the photographs, are now online and available at this LINK. Enjoy-
March 26, 2019