Rush to Appear on the Cover of Rolling Stone Magazine Update: April Fools, Everyone! Yes, by now I'm sure you all figured out that Rush appearing on the cover of Rolling Stone Magazine was, of course, an April Fool's joke. It was a blast perpetrating this joke alongside my partners in crime, Eric from Power Windows and Ed from RushIsABand. The three of us came up with this idea several weeks back and have been carefully plotting out the details ever since. We all hope you enjoyed the ride. We now return you to your regularly scheduled Rush news :-) Update: My contact at Rolling Stone Magazine just informed me that an excerpt from the cover story along with some photos are now available online. Check them out via this link: Rush in Rolling Stone - Image Excerpts. Enjoy! Now this is a first. According to a source from Rolling Stone Magazine who just contacted me, Rush will appear front-and-center on the cover of the upcoming April 21st, 2012 issue of the famed music magazine. The issue will include a feature story titled ‘Clockwork Excellence’, as well as numerous photos of the band, reportedly taken during their Clockwork Angels recording sessions in Toronto and potentially also their mixing sessions in Los Angeles.

The source also sent along the following working copy of the magazine cover (Image) and indicated that some story excerpts and photos from the issue would be available at RollingStone.Com soon.

According to the story headlines listed on the working cover, some information regarding the Rock & Roll Hall of Fame and Rush's omission from the institution will be included in the issue. That alone should be worth the price of admission!

After receiving the information, I reached out to Eric from Power Windows and Ed from RushIsABand, both of whom also received the same information.

Over the decades, Rolling Stone magazine hasn’t necessarily been kind to Rush. However their attitude has changed of late which led to Rush being featured, though not as part of a cover story, back in July of 2008 in the article ‘Rush Never Sleeps’.

We’ll have more information – and links to the story and photo excerpts at Rolling Stone's website – when they become available.

In the mean time, click HERE to view a high-resolution version of the working cover artwork.

And of course Geddy officially became an author with the release of his book - Geddy Lee's Big Beautiful Book of Bass last year.

In addition to today being Geddy's birthday, this date also marks the 46…
Read more 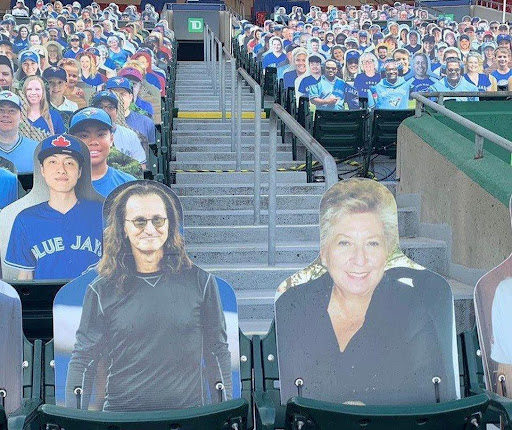 With the pandemic-truncated baseball season upon us, and stadiums across the country virtually empty of fans, many teams have taken some rather unique approaches to bringing some life back to the ballpark. Along with pumping in the sounds of crowds, quite a few teams have also filled the empty seats of the stadium with cardboard cut-outs of fans.

The Toronto Blue Jays are no different as they have now announced a collection of cutouts that will appear behind home plate including one of Geddy Lee. With the current state of the pandemic, the Blue Jays are actually playing home games at Buffalo’s Sahlen Field. As most fans know, Geddy is an avid baseball fan and has often been seen situated behind home plate of numerous Blue Jay home, dutifully making notations in his scorecard.

According to this article, some 1,600 cutouts will be "...perched in nine sections at Buffalo’s Sahlen Field on Tuesday when the Jays will host the Miami Marlins, their first game in their temporary home.…
Read more

Neil Peart's immediate family, including his parents Betty and Glen, as well as his sister Nancy and her family are preparing a silent auction of donated items to help support the Royal Victoria Hospital in Barrie, Ontario.

From the annoucement:Peart Family Memorial Fund Auction
A bidding auction with amazing items donated by so many generous friends, family, & fans!

Members of Neil's Family (his parents, Betty & Glen, and sister, Nancy and her family) have all had to use the services at Royal Victoria Hospital in Barrie, Ontario and are active supporters of the RVH Foundation. With offers of so many amazing items, they decided that setting up a silent auction in support of the foundation is the perfect way to honour Neil's memory. We are so thankful to all of the amazing people who are donating items. We can keep this auction going as long as items keep coming in.

We will set up deadlines for each item so that we will always have something live to bid on. You…
Read more

Update (09/10/2012): As expected, Rush made a few changes to the set list last night in their second concert on the Clockwork Angels tour. To see the changes, which apparently will alternate back and forth for each show, click HERE.Update (09/09/2012): My photo album from the show, which includes over 400 pictures from the 3rd row, is now online. Check it out HERE.Update (11:45pm EST): Well, the concert is over and it was fantastic. I hope everyone enjoyed the streaming of the set list. I also took several hundred photos which will be online sometime tomorrow. I tried to post them to this news stream, but obviously something went awry. Thanks everyone!Update (2:00pm EST): We have arrived in Manchester! It's been 433 days since Rush last took the stage, closing out their 2010-2011 Time Machine Tour last July at The Gorge outside of Seattle, Washington. Tonight, the band returns to open up their Clockwork Angels World Tour at the Verizon Wireless Arena in Manchester, New Hampsh…
Read more