Headlong Flight, Rush's latest single from their upcoming album Clockwork Angels is now available as a digital download at Apple's iTunes Store as well as at Amazon.Com.

Unfortunately, there is still no word if Headlong Flight will also be released as a CD-single but given the lack of news at this late stage, the assumption is that it will only be available as a digital download.

To view the lyrics of the single, please access the main Clockwork Angels Album Page from the main site.

Finally, for those who missed the official video of Headlong Flight, you can watch it below.

The Percussive Arts Society (PAS) has just announced the induction of Neil Peart into their Hall of Fame. The annoucement from the PAS website includes a seven-minute video as well as a moving tribute to Neil written by David Stanoch, a versatile drumset artist and educator of over thirty years. An excerpt from his tribute is below: Everyone knows 2020 is going down in history as the single most challenging year humankind as faced in modern history. Between the ravages of a worldwide pandemic threatening our families and livelihoods and the hopeful signs of long-needed change rising from another needless social tragedy, after too many years of looking the other way, our world is aligning to a reckoning of what truly matters—to our families and our shared community—with a new sense of urgency. Leadership and forward thinking are in much needed demand. In our corner of the world, as percussionists who strive to make a difference in expression through the musical arts, our year began
Read more 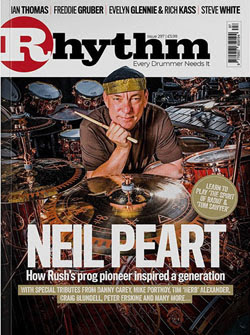 The November 2020 issue of the UK's Rhythm Magazine features Neil Peart on the cover and includes an extensive tribute to the late Rush drummer. The cover feature article titled The Measure of a Life and penned by Chuck Parker is a poignant look back at the life and inspiration of Neil's body of work; not only as a drummer but also as a writer and lyricist. From the piece: In addition to Peart’s immeasurable impact in the music and drumming world, his other artistic contribution was his love of the written word. This was apparent through his command of language, whether writing or speaking about an idea, be it in a song, interview or book. Peart always seemed to use the perfect word or phrase to convey his thoughts. Many music lovers had difficulty getting past bassist and singer Geddy Lee’s unique vocals. To some, he was a wailing banshee while others thought his original sound fit Rush perfectly. But even those who couldn’t get past Lee’s singing had to admit the prof
Read more

Hudson Music, the company behind Neil Peart's instructional videos Anatomy of a Drum Solo and Taking Center Stage have just announced the Neil Peart Drumset Scholarship . According to the post from their Facebook Page , applications for the scholarship will begin in March 2021 thru the Percussive Arts Society ( PAS.org ). PAS will annually award four drummers the opportunity for online drumset lessons from well-known artists/educators. A brief promotional video, which can be viewed below or directly at this LINK was also released. We'll have more details on the scholarship as they become available.
Read more

Throughout their storied career, the members of Rush have received numerous accolades, awards, and recognitions. In addition to their lengthy list of musical awards and memberships in various “Halls of Fame”, Rush were the first rock band to be invested as officers of the Order of Canada. They received stars on both Canada's and Hollywood’s Walks of Fame, honorary PhDs, and, more recently, a trio of Capybara Pups housed at Toronto’s High Park Zoo were named after the band. Now, in another ‘first’ for the band, a newly-discovered trio of microbial species will be forever connected to Rush. Patrick Keeling, a professor of Microbial Evolution at the University of British Columbia recently informed me that three new species of have been formally named in honour of the members of Rush: Pseudotrichonympha leei, Pseudotrichonympha lifesoni, and Pseudotrichonympha pearti . The new species are large, single-celled organisms called “parabasalians” that live inside the guts of termites
Read more