Update (09/10/2012): As expected, Rush made a few changes to the set list last night in their second concert on the Clockwork Angels tour. To see the changes, which apparently will alternate back and forth for each show, click HERE. Update (09/09/2012): My photo album from the show, which includes over 400 pictures from the 3rd row, is now online. Check it out HERE. Update (11:45pm EST): Well, the concert is over and it was fantastic. I hope everyone enjoyed the streaming of the set list. I also took several hundred photos which will be online sometime tomorrow. I tried to post them to this news stream, but obviously something went awry. Thanks everyone! Update (2:00pm EST): We have arrived in Manchester! It's been 433 days since Rush last took the stage, closing out their 2010-2011 Time Machine Tour last July at The Gorge outside of Seattle, Washington. Tonight, the band returns to open up their Clockwork Angels World Tour at the Verizon Wireless Arena in Manchester, New Hampshire.

The tour, currently set to encompass 34 dates during 2012, will hit spots around the U.S. and Canada. After an extended break, Rush will resume the tour in May of 2013 to play across Europe for 10 dates. More concert dates have been promised from the band, but will likely not be announced until the end of the 2012 leg. For a complete tour date listing, click HERE.

Excitement and debate has been raging in the online Rush community over the set list for the tour. Rush's announcement that they'll be touring with a string ensemble, a first for the band, only further whet the appetite of fans and fueled the speculation about the potential for old songs to reappear - or make their debut - under the live setting.

As I will personally be in attendance at the tour opener in Manchester, I plan on posting the set list, LIVE as it happens on this page. I will also be posting pictures and pre-concert news right here as the day progresses (technological snafus not withstanding). So stay tuned to this page for updates throughout the day.

And for those who are also going to the show tonight, have a great time!
Click HERE for the Clockwork Angels Set List 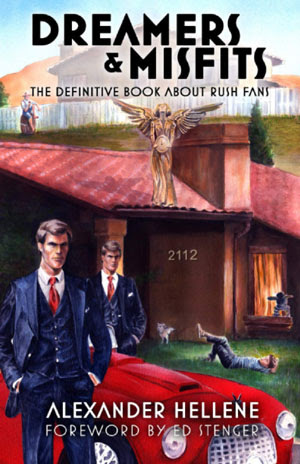 A new book that focuses on Rush fans and their stories is now available. Titled Dreamers & Misfits: The Definitive Book About Rush Fans and written by Alexander Hellene, the extensive 370+ page book is available in both Kindle and Paperback formats. From the Amazon.Com listing: There Is Nothing Average About the Average Rush Fan!Rush, the legendary Canadian progressive rock trio, has a legion of devoted fans. But what is it about the band that inspires such a loyal and dedicated fan base? And what is it about these fans that has created this powerful bond between artist and audience? The story of these fans has never been told . . . until now. - Exclusive interviews, including Donna Halper, the woman who broke Rush in the United States, and Ed Stenger, proprietor of RushIsABand.com, one of the biggest Rush fan sites on the internet. - Detailed survey results illuminating what makes hundreds of Rush fans tick- An exploration of the interest, politics, faith, and philos
Read more