Update (2:10pm EST): A new publicity photo of Rush has now been posted along with the Marketwire Press Release for the new album. Thanks RIAB! Update (1:20pm EST): Check out this article from Prog Magazine - Rush New Album Exclusive. From the article: "...on one song, The Wreckers, Lee and Lifeson swapped over instruments during the writing sessions..." Update (11:40am EST): Rush.Com has been re-skinned with new artwork to celebrate the official announcement of the release of Clockwork Angels. The band also posted the following about the forthcoming album:

Rush has unveiled details of its highly anticipated, new album, “CLOCKWORK ANGELS.” This is the first new collection of original material in over five years and their first studio release via Anthem/Roadrunner records. “CLOCKWORK ANGELS,” the band’s 20th studio album, will be released on June 12th.

The recording of “CLOCKWORK ANGELS” began in April 2010 with Grammy Award winning producer Nick Raskulinecz (Foo Fighters, Deftones) – who also collaborated with the band on their last studio album, 2007’s “SNAKES & ARROWS.” Rush co-produced both records. The first two songs, “Caravan” and “BU2B,” were completed during that first session at Nashville’s Blackbird studios and performed nightly during the wildly successful Time Machine Tour, which ran from June 2010 to June 2011. Work on “CLOCKWORK ANGELS” resumed in the fall of 2011 at Revolution Recording in Toronto after the tour’s finale, with additional strings (arranged by David Campbell) recorded at Hollywood’s Ocean Way Studios earlier this year.

Lyrically, “CLOCKWORK ANGELS” chronicles a young man’s quest across a lavish and colorful world of steampunk and alchemy as he attempts to follow his dreams. The story features lost cities, pirates, anarchists, an exotic carnival, and a rigid Watchmaker who imposes precision on every aspect of daily life. The novelization of “CLOCKWORK ANGELS” is being written by science fiction writer Kevin J. Anderson in collaboration with Rush drummer and lyricist Neil Peart.

Rush will herald the release of “CLOCKWORK ANGELS” with a new single “Headlong Flight” landing at rock radio on April 19th. Details of a full-scale North American tour to support the new album will be announced shortly. - Rush.com, April 11, 2012

Billboard Magazine has just posted an official announcement regarding the release (now set for June 2012) of Rush's forthcoming album Clockwork Angels. The announcement includes the complete tracklist for the album (12 songs in all):

There's also a trailer for the album which includes a preview of the first single Headlong Flight: Finally, according to the announcement, Clockwork Angels will be released on June 12th and not May 29th as originally expected.

Read the entire announcement at this LINK.

You can also now pre-order Clockwork Angels from Amazon.Com once again. The current price is $19.61 which seems to imply that the CD may be packaged with a 5.1 DVD version as well. More news on that potential offering as it becomes available.

Alex Lifeson will be speaking with Andre Cholmondeley of Make Weird Music this Saturday. The live interview will take place on Make Weird Music's YouTube channel at 6pm EST. From their announcement: Alex Lifeson of Rush is one of the greatest rock guitar heroes of all time and we are so fortunate to have him for a live interview where we'll discuss the 25th anniversary of his solo album, Victor, and the 40th anniversary of Moving Pictures. Rush have yet to announce any plans for a 40th Anniversary release of their seminal album Moving Pictures so perhaps Alex will have some insight on the expected release. Additionally, it was last June when we first reported that Alex's solo effort Victor might receive a special 25th Anniversary re-release. Hopefully Alex will expand on this during the interview as well. You can access the interview directly at this LINK or via the embedded viewer below. Thanks to RushFanForever for passing along the news.
Read more

A Night for Neil - The Neil Peart Memorial Celebration Rescheduled to November 6th, 2021

The charity fundraiser concert A Night for Neil: The Neil Peart Memorial Celebration has been postponed once again due to the ongoing pandemic restrictions. The concert is now scheduled to take place on November 6th at the Meridian Centre in St. Catharines, Ontario; Neil Peart's hometown. From the event page: “Though we live in trying times, we’re the ones who have to try…” We hope this message finds you all healthy & safe as COVID-19 restrictions force us to once again postpone “A Night for Neil” until the Fall of 2021. The new date, with a flexible plan, is scheduled for Saturday, November 6, 2021. Overtime Angels, in coordination with the Meridian Centre, will be evaluating any quarantine protocols or travel restrictions to Canada three months prior to the new date so that all the fans who have purchased tickets have a reasonable amount of time to reschedule any associated travel/hotel reservations. We are so grateful for our fans and appreciate your patien
Read more 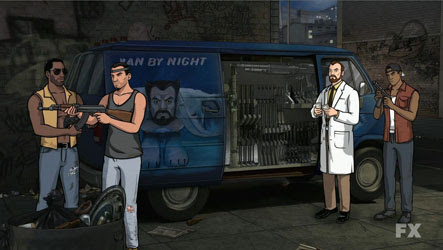 FX's long-running animated series Archer has had a history of Rush sightings throughout its run. Most have taken place in the form of a Rush album-themed mural appearing on the side of Krieger's van (one of the main characters in the show). On the most recent episode of the show from the 4th season titled "The Wind Cries Mary," Krieger's van received the "Fly By Night" treatment. Check out a full-sized screen capture HERE . This is the fourth such Rush reference on the series, and the third van motif to appear. Back in March of 2012 , a Neil Peart-inspired drum kit along with a conversation regarding YYZ takes place between the show's characters. Back in January of 2012 , a van appeared in the show with a Hemispheres -style painted motif. And in April of 2011 , another van appeared in a great Exit...Stage Left motif. Thanks to Ed from RushIsABand for the news and the screen-cap. Related News Stories [ Another Rush Reference on FX&
Read more